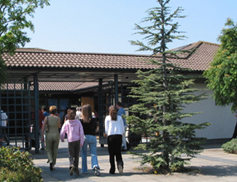 The Church It is a 600 seater community designed church with a welcoming courtyard. It was designed by Joseph Kennedy of Edward N. Smith & Kennedy and built by Matthew Wallace, Builders, Wellingtonbridge, Co. Wexford. It was opened on 6th June, 1993 by Archbishop Desmond Connell. As well as the church proper it features a Day Chapel/Community Room with a Parish Office and Sacristy. Visitors to our parish fequently comment that it is a warm inviting space within which to worship.

A very impressive feature of the church is the eight foot high triple stained glass Harry Clarke studios window of the Immaculate Conception which was donated to the parish by the Dominican Sisters in Dun Laoghaire when sadly their convent there closed down. It was restored when it was being built into the new church and care was taken to preserve it for the future.

In the church there is an interesting white marble carving depicting Our Lady giving the Rosary to St. Catherine and St. Dominic, also donated by the Dominican Sisters. It was carved in the late 19th century by Padraig and Willie Pearse's father in his stoneworks situated on the street now called after that family - Pearse Street. 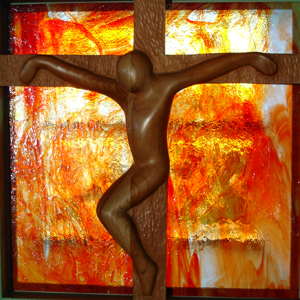 Another noticeable feature of the church is the stained glass stations of the cross. Click on this link to see them.

The people of the parish have a great sense of pride and ownership because when plans were afoot to build a new church they were invited to visit churches throughout the city and country bringing their cameras with them. Those who did so later met with two firms of architects and presented their ideas within a budget of half a million pounds. The architects took the ideas on board and in due course came back with two sets of designs which were displayed for a couple of weeks in the old prefab church on the nearby site. The people made their choice. The Parish Development Committee made the decision and the rest is history.

Who was St Thomas?

He was one of the twelve apostles. The one who doubted that Jesus had truly risen from the dead because he was not there to see him on the first occasion he appeared to the assembled disciples. The next time Jesus appeared Thomas was there and he invited him to put his hand into his side and his finger into the marks of the nails and Thomas then believed and confessed the famous words "My Lord and My God" and Jesus said to him "You believe because you have see Thomas, blessed are those who have not seen and yet believe."

Adapted from an article by Eugene Kennedy, Former Parish Priest